The Ministry of Education Officers have allowed MWCT to continue ranking schools within Kuku Group Ranch at the request of the local area Member of Parliament.

This is the third year that Olorika has been awarded the top position since the inception of the Education Day celebrations 4 years ago when MWCT introduced the trophy.

On an annual basis, the Maasai Wilderness Conservation Trust hosts the Kuku Group Ranch Education Day. This day long celebration is hosted for the purpose of congratulating the schools that emerges the best in the Kenya Certificate of Primary Education (KCPE) examinations. This year, Olorika Primary stood amongst the 20 schools in Kuku Group Ranch and scored the top position.

The Maasai Wilderness Conservation Trust sends congratulatory wishes to Olorika Primary School once again! We are always recognizing that along with a healthy, sustaining environment necessary for traditional Maasai pastoralist culture and livelihood, one of the top priorities will always be Education! 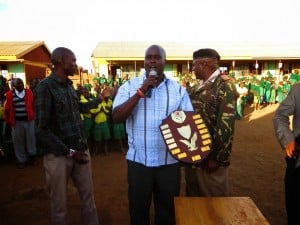