Over 100 tonnes of Elephant Ivory and Rhino Horn. It’s hard to grasp just how significant that is until its seen in pyres beside each other. The visual stunned us all as we stood in the mud at Nairobi National Park on Saturday, April 30th 2016.

We made our way through security and boarded a bus with representatives from BBC, WildAid and other publications that were all geared up to document this well debated event. We made our way through the rocky paths and immediately noticed the 11 stockpiles in preparation for the burn. The place was littered with people and media. Guards stood by, keeping people at bay as they tried to inch closer to the pyres trying to get that perfect shot.

As we stood there staring at the Ivory, I couldn’t help but become overwhelmed with an aching pain of sadness for the thousands of innocent lives of Elephants and Rhinos before my eyes, each wrongfully murdered by a poacher. Almost 6 hours of waiting and a speech by Kenyan President, Uhuru Kenyatta later… the pyres were lit. I was rendered speechless at the sight of it all, and also overwhelmed with a sense of gratitude that there are dedicated conservationists and wildlife lovers alike supporting the message that these majestic giants are worth more alive than dead. 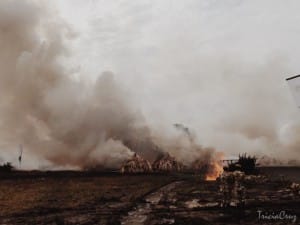 I couldn’t help but also wonder.. does burning the ivory really solve the demand of the ivory trade? Some conservationists claim burning this much ivory only increases the value of the rare commodity, which some believe will encourage further poaching. The BBC writes:

“Africa is home to 450,000-500,000 elephants but more than 30,000 are killed every year for their tusks. Tanzania has lost 65% of its elephant population in the past five years. The Kenyan ivory pyres are seven times the size of any stockpile destruction so far, and represent about 5% of global ivory stores. The ivory is getting through because people are prepared to pay for it. Stopping the men with arrows and the corrupt officials is just one part of the solution – the other is destroying the hunger for ivory.”

Despite what side you are on, the statement made that day in Nairobi National Park was heard loud and clear.. the only owners of Ivory and Rhino horns are the creatures they originated from.

As we headed back to our home in the Chyulu hills to MWCT HQ, we flew over vast landscapes and saw wildlife as they traversed in the hot sun. I couldn’t help but feel a sense of passion and gratitude as we soared over the green hills. Our work to decrease the human wildlife conflict here in Kuku Group Ranch in creating community awareness that the wildlife are much more valuable alive is a mission that we all live and breath here at MWCT. Though this fight is a long standing one, it is crucial to state messages like that expressed through the burning pyres that day to instill some understanding that Elephants, Rhinos, Lions and all wildlife on the brink of extinction need our help to keep their numbers from plummeting.